Tomorrow is the deadline to set the 40 man roster for the Rule 5 Draft.  I could post an exhaustive list of players the Cubs have who are eligible, but instead, I have chosen to go the lazy route and link it here to Chicago Cubs Online.  I would expect at least one of those guys to be taken.  We’ll see…and we’ll see if the Cubs actually select anyone this season.  They did pick RHP Lendy Castillo last year, and they lost Ryan Flaherty and Marwin Gonzalez.

I am amused by Bruce Levine’s vague report that a “big trade” involving “young players” is in the works.  That is not to say I doubt the report, because Bruce Levine has proven to be nothing, if not reliable, in his reporting from my perspective.  It’s just so vague that it boarders on “not worth mentioning until something actually happens” or actual names come about.  If/ when the deal is brokered, I’m sure I’ll have comments on what went each way.  Until then…

The Cubs did agree to sign Shawn Camp today for another year.  The question is whether he’ll actually sign before the Rule 5 deadline, or if the parties agreed to hold off on putting ink on paper until after this mess is cleaned up so the team can keep an open slot on the 40 man roster for someone they’d prefer not to lose.  All of the official reports say they’ve “agreed.” I think that might mean something.  I could also be wrong.  If he indeed signs, the 40 man inflates to 39.

I am still completely behind the idea of the Cubs signing OF Jason Bay.  He is a guy who could probably be had cheap, play a corner OF spot, and be flipped if he performs well.  That is exactly the kind of guy the team is looking for at this point.  I’m not exactly sure about whether or not Theo Epstein (who acquired Bay when he was in Boston) or Jed Hoyer have had the same idea.  I’m just throwing it out there.

After the last post, the Cubs announced they signed Dioner Navarro to catch, likely in a back-up role to Wellington Castillo.  He spent last season with the Reds.  Statistically, he’s nothing special.  Career, he’s a .245/.306/.357 guy.  He did manage to be selected to the 2008 AL All-Star team with the Rays.  His value is probably to help Wellington Castillo as a major league catcher, and allows Steve Clevenger to go back to Iowa and work on his craft for another season.  Clevenger is still new to the position.  Time in the minors to fine tune will serve him will in the long run. 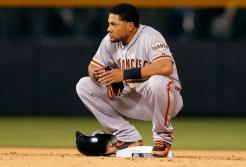 With news of Melky Cabrera being suspended for 50 games, effectively ending his season, Alfonso Soriano’s name has surfaced as an answer to who could replace Cabrera in San Francisco.  For what it’s worth, Soriano said no in July before the non-waiver deadline because of the dimensions of AT&T Park.  Soriano has cleared waivers this month and is eligible to be traded to any team.  That was expected because of the size of Soriano’s contract, and the amount of money left on it.  I would be surprised if Soriano was dealt to the Giants this month for that same reason.  The ballpark has not changed out there, and the weather conditions making it very tough to hit the ball out have not changed.  Those factors lead me to believe that Soriano’s decision on going to San Francisco probably has not changed.

The Cubs are in the midst of a serious reconfiguration of the front office, letting Vice President of Player Personnel Oneri Fleita go today.  Fleita was responsible for the additions of Starlin Castro, Carlos Marmol, and in part, Jorge Soler.  The reconfiguration of the front office is not a surprise.  Fleita being let go is a surprise, to some extent, as he was given a contract extension last September, before the Epstein/ Hoyer administration began.  Also let go was baseball information manager Chuck Wasserstrom.  Theo Epstein said today that front office changes would be continued, leading to a larger front office than before, when all is said and done.  It makes sense that there would be changes coming about now, as the transition period is effectively over after about 10 months.  Bringing in his own personnel was expected.  The most interesting comment out of the front office today was that Assistant GM Randy Bush is in “good standing.”  I am somewhat surprised at that, as he was Jim Hendry’s assistant.  Obviously, Bush has shown that he is compatible with the new front office, or the new front office likes the different perspective offered by Bush.

From today’s game: David DeJesus had a 4-4 game with his first two home runs at Wrigley Field.  Overall, DDJ reached 5 times, including his first intentional walk of the season.  Brett Jackson had a triple, and his first major league RBI, and a double, which were his first two career MLB extra base hits.  Starlin Castro went deep for the 12th time this season.  Carlos Marmol locked up another game in a non-save situation in the 7-2 win, clinching a series win against the Astros and a 3-4 homestand.  Anthony Rizzo did not have the best day at the plate, but his defense was, again, outstanding, contributing to four double plays on the afternoon, including the bizarre one to end the top of the 7th inning.  Starting pitcher, Justin Germano was excellent today, going 6.1 innings, giving up 2 earned on 5 hits with one walk.  For the Astros, Marwin Gonzalez grounded into three double plays.