In keeping with the theme of looking ahead, one of the interesting players for the Cubs moving forward is going to be 3B Ian Stewart.  Acquired from the Rockies, along with AA pitcher Casey Weathers for Tyler Colvin and DJ LeMahieu, Stewart was the first man given the chance to replace the departed Aramis Ramirez.  Stewart’s numbers, in 55 games, were not spectacular, but there is more to the story than plainly looking at the numbers. 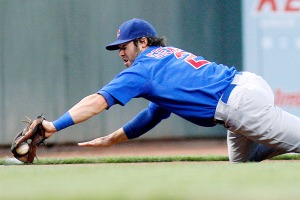 As I said earlier, there is more to the numbers than meets the eye for Ian Stewart.  First of all, he played in 55 games, so it is almost unfair to do this.  But, in his 55 games, he hit 5 HR and drove in 17.  That put him on a pace for 15 HR and 50 RBI in a full 162 game season.  What goes largely unnoticed is how much Stewart improved as the season wore on.  After hitting .169 in April, he hit .225 and .226 in May and June, respectively.  Part of that is how cold and windy it is at Wrigley in April.  As the weather got warmer, so did Stewart’s numbers.  With a ground ball: fly ball ratio of 2:1, it is fair to say Stewart would have out-performed his 15 HR pace.  One prime example is the bottom of the ninth inning on opening day.  Ian Stewart absolutely tattooed a baseball into the well in right field.  If there was anything short of gale force winds, he hits a game tying home run in the ninth inning on opening day.  But there were winds (I promise, I was there in a sweatshirt…it was cold) and he ended up with a hustle triple.  Offensively, his numbers were not great, but they were not as terrible as some of the haters have made them out to be.  Defensively, he was outstanding.  His range factors, fielding percentage, and runs saved numbers were all in the league average area, but some those numbers were all off the pace of his career averages.  I can speculate that defensive positioning had something to do with the slight drop in his defensive numbers, but his leather prowess did not go unnoticed by Dale Sveum, who said on more than one pregame show that his glove was keeping him in the line-up, whether there was a lefty starter or not.

Who else do Cubs’ fans know who hit about .225 (what Stewart hit in May/ June, which is a better indicator than his April average), with power from the left side of the plate and an excellent glove at a corner infield position?  I’ll give you all a hint: Carlos Pena.  And do any of us remember how much we liked Carlos Pena?  Of course not…because he’s not a Cub, anymore.  Ian Stewart, however, is a very similar player in what he brought to the line-up.  He brought a great glove and a workman like attitude, in spite of a wrist injury that absolutely hampers the ability to swing a bat.  If healthy, I have no doubt in my mind Stewart can match the 25-30 HR and 80 or so RBI Pena gave the Cubs in 2011.

Will Ian Stewart’s wrist heal after surgery enough to make him a productive player, and will be he back with the Cubs next season?

Without trying to read Jed Hoyer’s and Theo Esptein’s minds, I would guess that the two questions are going to be related.  Obviously, the Cubs sent a pretty good prospect in Colvin and a player many in the Cubs’ organization thought had a chance to be an everyday 2B in LeMahieu for Stewart, so the price was not cheap at all to get him here.  55 games with a bad wrist is not exactly a good opportunity to gauge what a player can do day in and day out.  Should Stewart get the go-ahead to start baseball activities again and gets his swing going again, he is worth at the very least, a look in Spring Training.  At best, he could find the swing that made him the 10th pick in the draft nine years ago.  To be picked that high, it is apparent that there is some talent in there.  Stewart said on Twitter some time ago that was was willing to take $1.5M for next season, which is peanuts in baseball, so he is absolutely worth bringing back, in my mind.  Josh Vitters continues to work hard, but he hasn’t exactly grabbed the bull by the horns and locked himself down at the hot corner.  Absent a surge by Vitters between now and October 3, there is no good reason not to bring Stewart back.  There are no good prospects, other than Vitters, waiting in the wings to come up right away.  Free agency does not offer too much of a short term, stop gap player to add for a year or two, and certainly  not as inexpensively as Stewart will be.  My crystal ball is not always right, but I cannot see why Stewart wouldn’t be back…at least for the spring.

Being led by Manager Buddy Bailey, Hitting Coach Mariano Duncan, and Pitching Coach Jeff Fassero, the Double A Tennessee Smokies are the forgotten soldiers in the Cubs’ farm system.  Many of the prime prospects in the Cubs’ organization are either in Single A Peoria or

Daytona or Triple A Iowa, which leaves the Smokies out of a lot of the conversation about the future of the Chicago Cubs.

The headliner of the Smokies is 2009’s 32nd round steal Trey McNutt, who is ranked 6th in the Cubs system overall.  A big 22 year old right-hander, McNutt features a powerful fastball that lives in the mid 90s, and a sharp breaking curve ball.  At the moment, he is the most promising starter in the organization, even though his 2011 was marred by injury issues.  His inaugural professional season of 2010 showed off how much potential he has, splitting time between Peoria and Daytona, where he was dominant with a combined 1.97 ERA in 100.2 innings.  This season, McNutt is rounding back into form, with a 3.65 ERA and a 1.36 WHIP in 49.1 innings.  While he still has some work to do at the minor league level, he could find his way to the Confines before the end of the season, especially if the expected trade of Ryan Dempster and the potential trade of Matt Garza come to fruition.

Infielder Junior Lake is another of the promising prospects that is in Tennessee this season, and he too is finding his way in 2012.  After a tough mid-season transition to Double A in 2011, Lake is having a strong season this year with a .294 average and .349 OBP.  Lake is still rough around the edges, but has raw talent in a multitude of dimensions.  He has a good arm in the field, but like his friend, major league SS Starlin Castro, still commits too many errors.  He also has above average speed, but below average base-running instincts.  If he gets a better read on pitchers, he could turn into a strong base stealing threat, although he will never steal 40 bases in a season.  His plate discipline is a bit behind, but like Castro, is a natural hitter with some pop.  The Cubs think enough of Junior Lake to add him to the 40 Man Roster, which is an indication that a big league debut could happen this season.

Other players that are sporting the Smokies uniform this season are RHP Casey Weathers, who came with Ian Stewart from the Rockies over the winter.  He’s been a little erratic, walking 16 in 14 innings pitched, but has some of the same raw talent that Lake and McNutt have to make him a potential reliable reliever.  Brian Schlitter is another name the Cubs’ fans may know.  He debuted with the Cubs in 2010 before making the waiver rounds in 2011, ultimately coming back to the Cubs.  He initiallyt came to the Cubs from the Phillies for Scott Eyre in 2008, made his trip around waiver lane and is now refining himself in Double A.  Lastly, James Adduci is a 27 year old minor league veteran that was a trade replacement from the Marlins in 2006 when the pitcher acquired for Todd Wellemeyer was found to have a pre-existing hand injury.  Adduci is the kind of minor leaguer that every team has, spending a lot of time in the minors, but Adduci has seem to find his stride this season and could find an invite to the show if the big league squad suffers from injuries or sees turnover in the trade market.

Traditionally, Double A is where the most intriguing prospects are found.  With Triple A being a major league overflow of sorts, Double A is where prospects go to really learn the major league game.  The Tennessee Smokies are a highlight of just how bare the Cubs system has been in recent years, because there is not a ton of major league quality talent in the pool.  Years of trading quality prospects for veteran bandages have left the Smokies as a middle child of sorts, with the best talent sitting in Iowa or the Single A level.  With Theo Epstein & Co. looking to build the franchise from the ground up, the Smokies could be infused with talent very soon, as an important stop on the road to Wrigley.

The Cubs have finished signing every player on their 40 man roster with 0-3 years of service time, according to ESPN.com’s Doug Padilla. The list of players is as follows: