It is undeniable that Starlin Castro is the player who gets the most attention on the Cubs’ roster.  There is good reason for that.  A $60M contract extension will do that, especially when you’re 22.  594 career hits at time in his life when a lot of kids are just finishing college will also do the trick.  The man is a lightning rod for fans to pin their hopes for a future championship on.

He is also a man for fans to beat down.  And he gets beat down because of the media attention that is placed on him.  More specifically, the intense scrutiny that comes with every mistake he makes.  We can all still hear Bobby Valentine talking about how his head wasn’t in it on that play on Sunday Night Baseball two years ago…admit it.  CSN Chicago’s Patrick Mooney says it best when he says that Starlin “moves the needle.”  As in, he draws eyes to the screen, to the paper, and clicks to the websites.

Don’t get me wrong.  I like the coverage a lot of the beat writers and the talking heads provide of the Cubs.  I think they do a pretty solid job of keeping a pretty uninteresting team entertaining through a tough rebuilding process.  That’s their job, and they do it well.  Things like this, however don’t help a young player with the weight of 105 years on his shoulders…

Hey Starlin, have you ever heard of sprinting out of the box!!!!! Jog when the ball hits a bleacher seat.

On his ninth inning drive to left field, it is true Starlin admired his work.  He did not run out of the box as hard as he could have.  And I hope it was discussed on the plane to New York tonight between Castro and Dale Sveum.  It can’t be with a veteran leader because Alfonso Soriano and David DeJesus both made stupid base running mistakes today, too, and they should also have a conversation with their manager, and it should be less cordial than the one with the 23 year old.  To be fair to Starlin, he CRUSHED the ball.  The wind made it a double.  That ball was going to be a walk-off home run in the ninth inning, the double it turned out to be, or an out.  No amount of busting it was going to change that.  It sure did put some heat on a kid who is hopefully breaking out of a slump after a good day today, though.  Yes, he did have two errors (one of which was a really tough play, and the throw drew Rizzo off the bag when it was going to be close anyway), but his bat came to life a little.  He looked like the Starlin we saw in 2010 and 2011.

I like David Kaplan, so don’t mistake this as an attack on him.  That’s not the intent.  He is a passionate fan who calls ’em like he sees ’em.  It’s good stuff.  But his Twitter following is roughly 100 times what mine is, and his soap box is television.  To an extent, and this is just my opinion, you either have to call all of them or none of them.  Alfonso Soriano made a total bonehead play in the 8th, getting thrown out at second on the most routine of base hits right in front of him.  After the walk and base hit immediately following his mistake, who knows what happens, but Schierholtz scored the tying run when he could have been the go ahead run after Soriano scores in front of him.  Castro’s play in the ninth could have been avoided if Soriano, a 37 year old veteran ball player didn’t make the king of base running blunders.

That was the stupidest base running play the #Cubs have made this season. Gave away an out against elite bullpen.

In the 13th, David DeJesus jogged on down to first base on a routine ground ball and stopped short of the bag.  None of this is a big deal, except that the Gold Glover, Brandon Phillips bobbled it and he could have made it a close play at first, or even gotten into first had he hustled.  As John Arguello pointed out at the time, though…

Thank goodness that wasn't Castro not running through the bag. We'd have heard all about it. But since it wasn't him, no problem.

This is not to say we shouldn’t be upset or even criticize Starlin Castro.  The point is actually much more simple that that.  We shouldn’t unfairly criticize Castro.  His defense is still a topic of hot conversation, even though he is on pace for the fewest errors in a season of his career, even after his two today  (Nine errors in 64 games, which is a pace of roughly 23 for the season…Javier Baez has 26 at last glance at Daytona.  So no, he’s not better at short right now, meatballs).  My point is that we shouldn’t hammer the kid when he does something inconsequential like today.  And we absolutely should hammer all of the players when they don’t hustle, make stupid mistakes, or drop routine fly balls that they can get two hands on and catch, which would save a run (Looking at you again, DeJesus).

Even Brant Brown is laughing at DDJ there. Freakin wow. #Cubs

Then again, maybe I’m just saying all of this for hits on the blog. 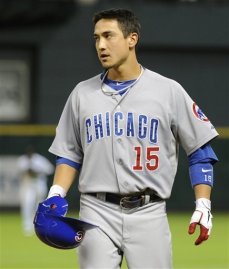 In the last inning of the last game required to break the consecutive errorless games streak by a second baseman, Darwin Barney committed an error.  A throwing error, his third of the season.  His first error since April.  In spite of all of that, I still think Reds’ 2B Brandon Phillips is the favorite to win the Gold Glove this season.  These awards seem to be given based on reputation, and it is no secret that offensive production plays into the defensive award, as well.  None of this is to say that I don’t want Darwin to win the award.  He absolutely should.  It would be brutal for anyone but him to win after going over five months between errors, and the one he makes is on an insanely tough play.  Anybody that has seen the play knows that would not have been an error if it did not allow to cause a run to score.  We’ll see how it turns out.

After last night, the Cubs have gone 0-17 in road games against the NL West.  It is unfortunate that the team didn’t have a western swing in July, when they played well before the deadline.  They have two more opportunities to win a game out west this weekend, finishing the series against the D-Backs.  Should they fail to get a win, they will lose their 100th game, and have the first 100 loss season since 1966.

After all of the fuss about what Jed Hoyer said this week about having financial flexibility, it is important for Cubs’ fans to know that they can put away their anticipatory Josh Hamilton jerseys.  There will not be a major signing this off-season.  When you look at everything that the front office has said over the course of the last year, there is no reason to believe that they are going to pony up the cash for a big time free agent when they have said it is their goal to build from drafting and developing good players.  The goal is to have a strong organization from top to bottom, and we saw that over the course of the last few months.  Trading Ryan Dempster, Paul Maholm, Geovany Soto, and Reed Johnson were all products of building a strong organization.  When you combine those statements with Theo Epstein saying he made mistakes in his approach toward the end of his tenure in Boston, there is no reason to believe there are going to be any nine figure deals getting tossed around this off-season.  It will be another in the process of building for future success.  At this point, the actual baseball season is a formality.  Games, at least in the north side of Chicago, won’t be all that significant for the next two to three years.