Ultimately, this post boils down to, there is nobody else.  Without any strong introduction as to why Carlos Marmol should be closing games, I think the following stats say it all: 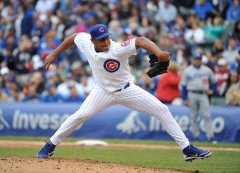 Aside from his rough outing against the Brewers on Wednesday night, Marmol has been his typical adventuresome self, giving up some walks, but not allowing runs to score since he returned from the disabled list.  The contact against him has not been all that good, either.  He seems to be the guy who goes out, throws some balls and walks a batter or two, and then figures it out on the fly again.  With the improved defense behind him at this point, some of the balls that got through last season and at the beginning of this season will be outs if they run him back out for the ninth inning.

After back to back perfect innings against the Giants last weekend, it appeared that Marmol was back on track, to some extent.  He has always been a pitcher that needs to be out consistently, without being overused to be effective.  To be the mop up pitcher he is being used as right now is not something he has done since becoming a set up man for the team in 2007.  It has not been my desire to question managers in the past, and by no means is this questioning what Dale Sveum is doing, but at this point, there is no good reason for Carlos Marmol not to be the closer.  He was effective in 2010 and in spite of all of his struggles last season, he still managed to save 34 games.

Today, on June 8th, the Cubs have one closer on the roster.  It is not Shawn Camp, who blew the save tonight.  Nor is it Casey Coleman, who gave up the walk off HR yesterday.  It’s not James Russell, either.  The sole closer on the roster is Carlos Marmol.  He’s been successful there in the past.  He has not thrown many innings this season.  He has been pitching better lately, tough night on Wednesday aside.  Give Marmol the ball and hope for the best, at this point.  Hell, it can’t get much worse than it has been over the last 24 days.