Last season, the Cubs’ defense was one of the things that let them down the most in a disappointing 71-91 season, which led to the Ricketts family getting rid of everything that wasn’t bolted to the floor.  That, by now, is common knowledge.  The most significant problem was the development of SS Starlin Castro and 2B Darwin Barney, who were both in their first full season in the majors, and Barney was learning how to play second, after coming up as a short stop.

This season, things are quite a bit better up the middle for the Cubs.  The eye test is the first indicator, showing us the range of both Castro and Barney, getting to balls that many players in their positions would not.  Darwin Barney, last night, made a dazzling defensive play in the ninth, turning a sure base hit into a fielder’s choice that retired Corey Hart at second base.  The numbers back up the defensive improvement.  He has one error in 254 total chances, which is good for a strong .996 fielding percentage.  His “range factor” rating is also at the highest it’s been in his major league career.  His range factors and fielding percentage are both above the league average 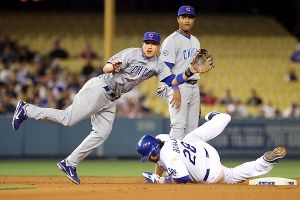 this season, and both improved over his 2011 numbers, which is a testament to two things: Barney’s hard work to improve his defense, and an accumulation of time at a new position, making him more comfortable.  It is simple to throw metrics out there as a quantification for improvement, and those support my assertion that he is much better, but the big things are the jump from 29th in 2011 to 6th thus far in 2012 in defensive efficiency, and the slight improvement in fielding percentage as a team.  Much of that is due to the improvement up the middle.

Starlin Castro’s defense is a different, but not dramatically worse, story.  There are lingering questions about his defense, which aren’t all fair.  His .966 fielding percentage is accompanied by his nine errors so far in 2012.  Six of those errors, however, came in two games.  And with the league average for short stops being .969, Starlin isn’t all that far off the pace of his peers.  The numbers that are a little more promising are his runs above average, which is on the positive side of the coin for the first time in his career.  His range factor numbers are significantly higher than the league average, which is one of the things that can explain some of his errors.  Starlin Castro has the range to get to a great number of balls that nearly all of the other short stops in the league would have get through for hits.  Castro gets to the ball, and has such confidence in his arm that he has thrown it away when he should hang on to it, thus causing the dreaded E-6.  What I can’t quantify are the mental lapses, which are mind boggling, frustrating, and any other adjective-ting word you can throw in there to describe them for a guy in his third season with the Cubs.  What gets lost is that the kid is 22.  The fact that lapses have been more often lately leads me to believe that Castro is at least a little bit tired, since he has started every game to this point, and has been expected to carry a huge load offensively.  Last season, Mike Quade gave him days off on occasion.  Dale Sveum might be wise to follow those footsteps.  For a kid trying to develop, he is being expected to carry a large burden for this 2012 team.  To be fair, the eye test has been kind to Starlin, too.  He doesn’t wait back on balls as much as he did in years past, his feet are much better, and he has repeated his throwing motion much more consistently this season, leading to a lot fewer errors at short…a not so slight indication that his work with Dale Sveum has paid off.

The new coaching staff has spent countless hours in spring and during the season working on improving the defense.  Infield Instructor, Pat Listach, has worked tirelessly with Castro and Barney both to improve their defense.  By all accounts, the two have been enthusiastic about improving their defense, as well.  It goes without saying that it is vital for the middle of the field to be covered defensively.  Last season, that let the Cubs down mightily.  This season, the team has been much improved defensively, and that is an effort that is led by the improvement up the middle.